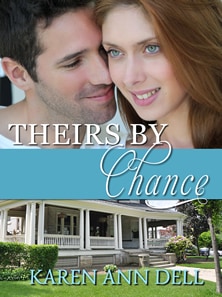 What are the chances that a woman running from a killer and an ex-soldier who couldn’t protect his men would find safety and redemption in each other’s arms?

Marjorie Matthews had been hiding in plain sight for the past six years. She’d appropriated her twin sister’s name and social security number, moved from Oregon to Maryland and was now the proud, if secretive, owner of Blue Point Cove’s only bed and breakfast inn. The grief that her mother and twin sister had died in her place never diminished, and unexpected events often elicited a panic response. Though she still had nightmares, she was beginning to feel more secure in the belief that the man who wanted her dead thought he had succeeded.

The arrival of Lance Fisher tips the first domino in Marjorie’s quiet life. The former Army sergeant, after treatment for the injuries that precipitated his PTSD, had checked out of Walter Reed and into Marjorie’s B & B to interview for a civilian job at the local indie radio station.

when Lance landed the job but couldn’t find permanent housing, she offered him the apartment over the Inn’s garage she’d been renovating for herself. Marjorie didn’t want to fall for the handsome ex-soldier. Everyone she loved had been killed by her former boss’s henchman, and she was not about to add Lance to that list. Delighted as she was with his continued recovery from PTSD, she struggled to keep their relationship firmly in the friend category.

While Lance appreciated Marjorie’s sympathetic attitude and gently teasing manners, he sensed she hid her real self behind a well-rehearsed facade. As their attraction intensified, Lance’s curiosity–and his protective instincts–rose to the fore as he determined to discover Marjorie’s secret fears and protect her from the past that haunted her. He’d get that chance sooner than either of them expected.

Theirs By Chance available now in print or e-format on Amazon.