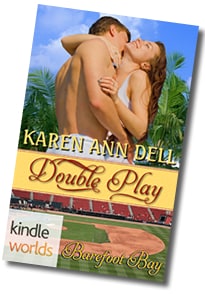 Sky Ziegfeld has a new job with Mimosa Key’s brand new Minor League baseball team, the Barefoot Bay Bucks. She’s left cold, rainy Philly behind—as well has her former boyfriend/boss, Handsome Ben, who’d taken advantage of her naiveté and played her like a Stradivarius. Although she already misses her parents and five brothers, she’s found a new roommate, leased a new condo and made a few new rules—no more exclusive relationships and no more special favors for any guys. She’ll play the field, pun intended, and enjoy the sunny skies of Florida. With all the hunky guys trying out for the new team, she’s got lots to choose from. But the first one Sky will cross off her list is the handsome would-be pitcher who seems to think good looks and a dazzling smile will get him around the rules.

AJ Reed is finally able to follow his heart’s desire to become a professional baseball player. He’s a bit older than most of the guys trying to make the team, due to obligations he owed his powerful, manipulative grandfather. The multi-millionaire banker, who paid for AJ’s first-class education, did so with the understanding that he would enter the high-powered world of investment banking. It took AJ five years to save enough to repay the debt and slip the leash his grandfather had tied so tightly around his neck.

His only goal is to make the team—until he meets the beautiful brunette head of human resources. They get off to a rocky start, but now there is another goal on his list—and he won’t be satisfied with achieving just one of them. Between fending off protective brothers and keeping up with dear old Grandad’s sneaky tricks, AJ has his work cut out for him to win a spot on the team and the love of Sky Ziegfeld.

Get a copy of Double Play by Karen Ann Dell

A Family for the Holidays

Kelly Singer wants a family.  Her mother, Kelly’s only surviving relative, has early onset Alzheimer’s Disease,  and lives in an assisted living facility in Naples, Florida. Most of the time she doesn’t recognize Kelly, and watching her mother slip further and further away not only breaks Kelly’s heart but increases her sense of isolation.

She and Sky Ziegfeld, both hired by the new Minor League baseball team on Mimosa Key, now share a condo on that lovely tropical island off the west coast of Florida. They are fast becoming best friends and Kelly envies Sky her large family. When they moved in together, two of Sky’s five brothers drove down from Philadelphia with Sky’s belongings. That’s when the trouble began.

Over the summer, Mike and Jed  visited frequently to watch the Bucks play. Mike, tall, handsome, and sporting a body honed at the fitness center he owns, captured Kelly’s attention. She’d like to step up their relationship, but Mike, badly burned by his first love, has kept her firmly in the friend category.

Sky and Kelly urge him to consider Mimosa Key for his next fitness center, and when he visits to check out properties for it, his hard-won resistance to Kelly crumbles.

After a week of intimacy during which he  carefully avoids any mention of a continuing relationship, Mike flies back to Philly leaving Kelly to wonder if there is any chance for a future together. An invitation from Sky’s mother to spend Thanksgiving in Philadelphia causes Kelly much anguish. The holiday spent with Sky’s family sounds tempting, but she doesn’t want to abandon her mother, nor is she ready to face Mike again. But, with a plan hatched by Sky’s brothers that allows Kelly to visit her mother and still join them for Thanksgiving dinner, Sky convinces Kelly to accept.

Kelly loves the warm welcome she receives from the Ziegfelds -especially from Mike. He gives her a tour of his fitness center, and she joins Sky and her dad in selecting the family’s Christmas tree. It all seems perfect until disaster strikes. Mike’s old flame pays a surprise visit, and Kelly’s mother escapes the grounds of Harbor House. In her frantic scramble to return to Florida go join in the search, she may wind up leaving Mike behind—along with her heart.

Get a copy of Barefoot Bay: A Family for the Holidays 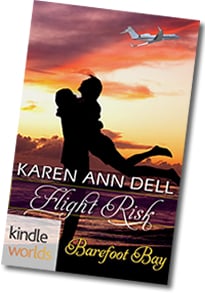 Argosy Charters would get a big step up into the world of the 1% from this cross-promotion with the Casa Blanca Resort & Spa. Everything is looking up for Owen’s company — until his old Air Force buddy, now an FBI agent, convinces him to help with a drug smuggler sting operation. Nothing goes as planned and the feisty brunette who is collateral damage literally falls into his arms. As a pilot in the Air Force, Owen Ziegfeld has had a bad experience with collateral damage, and he vows that this time, he’ll keep the innocent woman safe.

Miranda’s first impression of Owen Ziegfeld wasn’t a positive one. So when she finds him in her kitchen the following morning, things get physical — and not in a good way. Called into her boss’s office later, she finds out Owen is a pilot and the owner of the new charter jet service she’s supposed to hype to guests. Forced to work together, Miranda’s initial hostility fades quickly as the owner or Argosy Charters charms her with his wit and good looks.

There’s hot chemistry between them, but when he discovers that she was a pilot, now grounded by her fear of flying, Miranda worries her silence might alienate the man she’s falling hard for. A family emergency hundreds of miles away forces her to face her fears and return to the sky as a passenger with Owen at the controls. Their return to Mimosa Key is no less frightening for Miranda, but her long-repressed love of flying and Owen’s tactful support convinces her to accept help and work through the terrible accident that killed her father.

Soon Owen is drawn further into the FBI operation than he’d planned, and his concern for Miranda’s safety escalates. As the sting spirals out of control, events put Miranda back in the cockpit, while Owen fights to keep the woman he loves alive. 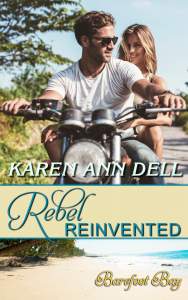 Jesse Ziegfeld lives in a world of pain. The piece of shrapnel lodged against his spine put an end to his career as a Navy SEAL, and left him with no idea how to move on.  For now he manages his brother’s fitness center until he can find a ‘real’ job.  Life throws him a curve ball when a young teenager tries to rob him as he’s leaving the gym. Remembering his own adolescence as the black sheep of his family, he decides not to call the cops but instead gives the kid a chance to turn his life around.

Sydney is one smart lady. She has an MBA from Wharton and a bartender’s education from her college days. She uses both skills to keep the bars, restaurant and private villas stocked with top shelf liquors at the Casa Blanca Resort & Spa.  In a few days she’ll be the Maid of Honor for her BFF Miranda, who wants to set her up with Jesse, her future husband’s brother and Best Man. But Sydney has a secret that casts grave reservations on that scenario. Already caught off guard by her divorced mother’s announcement that her new love will be moving in, Sydney quickly plans a trip to Philadelphia after the wedding to visit her dad while the couple ‘settle in’.

While hook-ups between members of the wedding party have become a cliché, neither of these two expect to feel any attraction to their opposite number. Jesse is sure Sydney will be a stuck-up socialite who wouldn’t be caught dead dating a former SEAL. Sydney assumes Jesse will be a macho, domineering military man whose idea of marriage includes a barefoot and pregnant wife.

Three heated days later, they’ve gone from strangers to lovers and back again when a verbal misunderstanding breaks the tenuous bond the pair forged so quickly. An unplanned meeting in Philadelphia lets the couple explore the possibility that the courage of true love can meet life’s twists and turns and set them on the road to a lifetime of happiness.