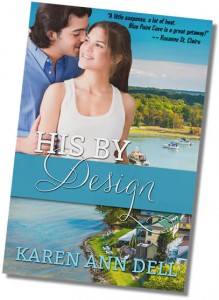 Zoe Silvercreek is determined to make Blue Point Cove a haven for artisans, and her gallery a showcase for their work. She’s begged, borrowed and bet her future on making her dream a reality. She’d better succeed because she’s not about to forfeit what she used as collateral for the loan.

Jeff Petrosky is a sculptor, currently making ends meet as custodian and handyman at the Blue Point Motor Court. His sister is the real artist, but he’s sworn to keep her secret—at least until he’s saved enough money for the surgery that would repair the damage to her pretty face. The renovation of Zoe’s gallery is a godsend. In exchange for his labor at rock-bottom wages, he’d get her to display ‘his’ paintings. He knew they’d sell for enough to fund Jenny’s operations. Once she healed and was willing to be seen in public, they could drop the ruse and she would claim the paintings as her own.

Working side-by-side sparks an attraction neither can resist, but as their passions ignite, the secrets they are keeping threaten to destroy their love as well as the business they both need so desperately.