Book One of the Blue Point Cove Series

Finalist in the 2015 Rone Awards 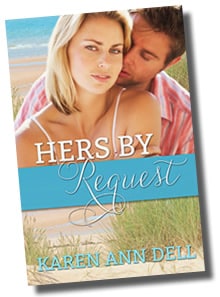 Hers by Request is the first in a series of contemporary romances set in Blue Point Cove, a small resort town on the Chesapeake Bay where there are two new residents, one shocking secret, and
a boatload of guilt.

The tragic death of Amanda’s fiance in Afghanistan eight months ago sent her back to the cottage where she’d spent her childhood summers to heal her heart and start a new life. Her accounting business was off to a slow start and the summer cottage was losing the battle with Maryland’s winter weather. The one thing that got her through many a cold, sleepless night was the warm voice of a local deejay and the songs he played.

Devlyn MacMurphy had finally been released from Walter Reed. The damage to his arm from the roadside bomb did more than destroy his career, it became the never-ending reminder that his best friend had given his life to save him. Now, instead of playing the piano, he played deejay on the late-night request hour he called Dev’s Dream Machine. It is past time to keep the promise he’d made Danny in Afghanistan, but when the woman he is supposed to look after turns out to be one of his frequent callers, his survivor guilt starts its own war –against the instant attraction he feels for Amanda Adams. When they meet by accident – literally – he’s given only a few seconds to decide– is honesty always the best policy?

“A must-read romantic mystery for the ages!”—