Let me say right from the start–I do not ♥ New York. I’m a small town person through and through. But the national Romance Writers of America convention was held ther 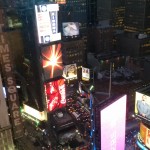 e last week, so I decided there was no better time to do my two (first and last) visits to New York.

The conference was held at the Marriott Marquis on Times Square and I’m fairly sure that half of the 8.4 million people who live in New York City were there–at least part of the time.

You’ve seen those underwater shots of schools of fish swimming together that all decide to change direction at the same time? That is what happens on street corners when the traffic signal changes. If you’re not prepared you could easily be swept away and wind up in Queens several hours later.

Don’t misunderstand, it’s not that the people are rude (well, maybe SOME are) but there are just so MANY of them. Half of them would like you to buy something. The other half are just as determined to get where they’re going as you are. Salmon swimming upstream have an easier time.

One nice thing about New York, though, is the dress code. There isn’t one. You could walk through Times Square in a ball gown or a bikini and not feel out of place. I passed a woman wearing nothing but a thong and body paint–seriously– and many folks didn’t give her a second glance. Well, yes, I did. Cause as I mentioned earlier, I’m a small town sort of girl. I did notice that a lot of guys had their cell phones out. I’m sure they were calling their moms to tell them about the unusual sights around Times Square.

About eighty percent of the vehicles on the streets of New York at any given time are taxis or trucks. Eighteen percent of the remainder are equipped with some type of siren. I think that is an actual law. The other two percent are foolish individuals who think they can drive a personal vehicle into the city and make it out unscathed.

We tried the subway which I suggest you avoid at rush hour if at all possible. I believe the term rat-race was born here as I saw several of the furry little guys tearing down the center of the tracks in between trains. I understand Uber and the mayor are having a bit of a row over taxi service in the city, but I must admit the Uber app worked for us quickly and comfortably. As long as you don’t mind that many of the drivers speak very little English, you’re fine. Our drivers were unfailingly polite and used GPS to navigate.

Be aware, half of the city is under construction, so most sidewalks have scaffolding on them. The streets need repairs badly. The last two winters have really taken a toll on the asphalt. Watch your step and carry an Ace bandage in your purse at all times – especially if you’re wearing heels.

The conference itself was fantastic, chock full of interesting workshops and scores of editors, agents and writers. Three days of workshops and the ones I wanted to attend seemed cleverly designed to all occur at the same time. I concentrated on those that were not recorded ( a minority, thankfully) and plan to catch those I missed on the conference recordings. They are expensive – but worth the price. The morning speakers were terrific Julia Quinn, Nalini Singh, and Barbara Freethy are all favorites of mine and I loved hearing them speak about their journey in romance publishing. There was a lot of excellent advice in all areas of publishing and since the industry is changing so quickly nowadays any hints for a relative newcomer like myself are welcome.

I took advantage of the location and arrived several days in advance to sight see. There were several places on my bucket list and, since I went with a couple of non-writer friends there were places they wanted to visit as well.

The Hayden Planetarium was number one on my list. I’m a closet

astronomy buff and would cheerfully hop on an interstellar spaceship if only one would offer me a ride. Movie stars are great but they don’t hold a candle to Neil deGrasse Tyson in my book. Unfortunately he wasn’t walking around at the Hayden, even though he is the director, so I was unable to get his autograph. I did see the Dark Universe show which

he narrated and that was amazing. If you get a chance, go. Learn about our planet and the universe that keeps expanding ever faster. Also the Hayden is part of the Museum of Natural History which is another wonderful place to learn thousands of tidbits of information that you may never use but are fun to know.

Number two on my list was a carriage ride through Central Park. We got lucky and 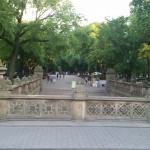 arrived right at 7 pm on Friday without knowing that from then until Sunday night no cars are allowed inside. We were even more fortunate to have Stephen Malone and his valiant steed Tyson (No relation to Neil DeGrasse) give us ‘the tour’. Stephen had a charming delivery and tons of knowledge about the parks history–some of which I hope to work into one of my future books. 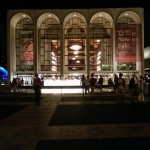 We saw The King and I at the Lincoln Center and I was completely blown away but the scope of the production. The cast was terrific, the costumes, sets, and the orchestra were wonderful. They made the shows I’ve seen back home look more like what you did as a kid with your friends and a blanket draped over a rope in the back yard. Awesome stuff. I wish I could have gone to more shows.

The 9/11 museum was filled with building remnants, pictures, audio, and video tapes of that fateful day and made me cry several times. It is well worth going to see but don’t expect to be cheerful when you finish. It will give you enormous respect for all first responders – police, firemen, ambulance crews – many of whom gave their lives trying to help others. 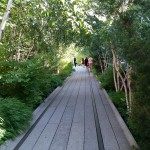 One of the lesser known gems of the city is the Highline, a park built around former elevated train tracks above the streets on the west side of Manhattan. It runs from 10th Street to 34th and although I’m not a frequent exerciser, I walked the entire distance and loved every step. We went early in the morning and again got lucky with the weather; it was sunny but cool and breezy. I was astounded at the plants and trees all tended by volunteers. If I had to live in Manhattan (and could afford it) I’d want an apartment with a view of the Highline. 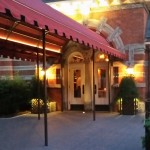 Our final piece of luck was timing. This week started New York’s restaurant week which allowed us to dine at some very fine restaurants at drastically reduced rates. We took full advantage and ate at The Tavern on the Green, The Russian Tearoom, and The View. The food was fantastic at all of them.

New York is filled with sights and sounds and smells unique to this big, bustling city. I’m glad I had a chance to experience the Big Apple and although I wouldn’t want to live there, it was a trip I’ll never forget.

You have Successfully Subscribed!

Thank You! You have successfully subscribed.